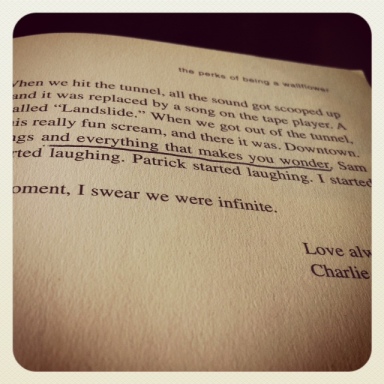 I feel like everyone has their own Perks of Being a Wallflower moment. The moment they discovered the book and felt like it was written entirely for them. Well, with the release of the movie’s trailer, I was reminded of mine –

It was the summer of 2002 and I was working at Borders. I remember shelving the small books and being instantly intrigued by the minimal yellow cover. It was so cute. And the title was very…me. I had always felt like a wallflower. So I bought it and brought it home and read it.

It was the summer after my freshman year of college and while I was four years older than the protagonist, I knew how he felt. It was just so real. So I started reading it every year.

So while reading, I started underlining my favorite sentences, passages, so I could easily go back to them. When I got back to college (I was home in Orlando during the summer; my school was in Tallahassee), I handed the book off to my good friends, instructing them to read it and underline their favorite passages. To me, the book felt like a letter I had to share, one that everyone made their own. I loved seeing the different underlined passages because while we all loved the I felt infinite moment, we each had different parts that spoke to us just as well. (My favorite line is the one underlined above. It’s simple, and perfect.)

In the process of handing it off so often, my copy started to wear down. Pages were lose, ripped. And then, one day, a friend spilled an oil candle on it. At first, I was upset; my book was ruined, gone, dead. But then, when the pages dried, I saw that there wasn’t any harm, really, and the only permanent damage was that it kind of smelled like cinnamon apple.

And I was okay with that.

Years later I taught high school english. On my first day, as a very scared 22 year old, I passed around surveys to my students to learn a bit more about them. Who was an athlete, who was a drama kid. The last question asked them what their favorite book was.

It wasn’t a Bill and Charlie moment; we didn’t become best friends or anything like that, but I was so happy to see that the book transcended generations. That the same book that spoke to me so many years prior still applied to teenagers today.

Which was when I realized that I could relate to these students. While I didn’t have a cell phone at their age, I did understand what it was like to be a wallflower.

And I think that’s the most important part of the book. It makes you feel understood, and connected to a larger group of people you might not have known otherwise. Good books can do that.

And this one certainly did.