Top row: S & I in the mountains on vacation, our new dining room, gifts my teens at the library gave me. Bottom row: some of my best friends, my amazing writer friends, and S & I announcing the pregnancy.

I suppose it’s no surprise that, aside from getting a book deal, the biggest highlight of 2013 for me was learning S and I were going to be parents. I mean, you can’t top that, can you? I think not. So even with the mood swings and weight gain, the aches and pains, the cravings and exhaustion, I’m still celebrating the little human that’s growing (and kicking) inside me. A friend said that once you’re pregnant you instantly fall in love, despite not knowing anything about your child. Well, she was right.

S and I took a crazy road trip from Orlando; up to Pine Mountain, GA; over to Nashville, TN; through the Blue Ridge Mountains; around to Asheville, NC; down to Charleston, SC; and then back home. We learned to like country music, swooned over waterfalls and mountains, ate a ton, saw friends, and bought a lot of records. (Ok, S bought a lot of records. I bought a book. Surprise!)

I enjoyed my job at the library more and more with each experience. Sure there are moments when patrons make me want to throw things, but those scenarios are quickly trumped by memories of a girl giggling over her first library card, a boy telling me he likes the books I pick out, my regular kid visitors who made me a bracelet because they like me, the grandmas from my book club shrieking over the baby news. One of our high school volunteers designed her own program, and we successfully put it on (and let me tell you, I couldn’t have been more proud). Summer Reading Program was a HUGE success with some events having more than 120 very happy children. My teen club, the nerdfighters, celebrated its one year anniversary, and they surprised me with a party and scrapbook that brought tears to my eyes. If starting the club, and bringing all of them together, was the best thing I ever did as a librarian, I’d be set.

Also…we bought a house! Yeah, S and I are homeowners which feels so adult (oddly more adult than having a kid.) We fix things and paint things and own a rake. It’s awesome, though, having this little house of our own. It’s ours to do as we please with (like paint the kitchen teal, which I might have done) and ours to love. And now, ours to create a little nursery in.

Movies: I think I saw a grand total of four movies in the cinema this year. Maybe more. I don’t know. I love watching movies, but I also get restless. And I hate being disappointed. So I don’t really have favorites of the year. I did really love Catching Fire and Frozen though. (The soundtrack of the latter may be on repeat at our home. S definitely does not want to build a snowman anymore.)

TV: During my first trimester, when all I wanted to do was sleep, I decided to check out Awkward because I love teenage melodrama (surprise surprise). I might have finished the first season in a weekend. And then the second. And then the third (as the last few episodes aired). So, yeah, you could say I’m a fan now. S & I together finally jumped on the Friday Night Lights bandwagon and I’m so glad we did (see: teenage melodrama). We might have just purchased the box set. Riggins! As for old favorites, I’m still highly in love with Mad Men and Parks and Recreation.

Plays: We saw Book of Mormon this year, and it was awesome. I love the songs (as awkward and awful as some are), the story, the whole moral. (Yes, there’s a moral!) It’s just a supremely well-done show, and I’m so happy it finally came to…ORLANDO!

Music: Let’s be honest, I haven’t updated my iPod since college. Aside from radio hits, the only *new* CD I checked out (aside from the aforementioned Frozen soundtrack and other various Broadway musicals) was Rkives by Rilo Kiley. A compilation of previously unreleased b-sides from a band I loved…in college. So I guess my music taste hasn’t changed much. But, man, that CD was great.

And, I suppose, that is it. There were downs, too, but I’d prefer to reflect on the ups, on the ways the year will be remembered. 2013 was great, and I can’t wait to see what 2014 brings.

And to you all, thank you so much for reading my blog, and going through these journeys with me. Your comments and likes make me smile. If I could hug you all, I would.

And so, until next year. Thanks for reading!

As happens when one is pregnant, I’m predominantly wearing leggings. (Not as pants, mind you. I’d never let Blair Waldorf down.) My professional skirts have stopped fitting (sob), and pants are just uncomfortable. So, leggings and dresses every day.

My co-worker (who works at a different library branch) thinks elastic waists are an abomination to fashion. So when I emailed him to let him know of my current situation, he sent me back the following:

I really hope that’s a line from your tween pregnancy YA novel. Suffering complications during her pregnancy, twelve year old Donna McPregers is cryogenically frozen until medical technology is capable of bringing her baby to term, she awakens in a dystopian future in which elastic is a precious commodity and her leggings put her in the crosshairs of New America’s sexy teen overlord who simply must have her pants. AND HER BABY.

Lauren Gibaldi writes: Not Without My Leggings.

Clearly me forcing him to read YA novels has worked.

I was leaving work today and realized that I have a weird desk. I mean, a really weird desk. It screams public librarian. I’ve always enjoyed blog posts where people reveal their work spaces, so I thought i’d show off mine. Today – work desk. Tomorrow – home writing desk. 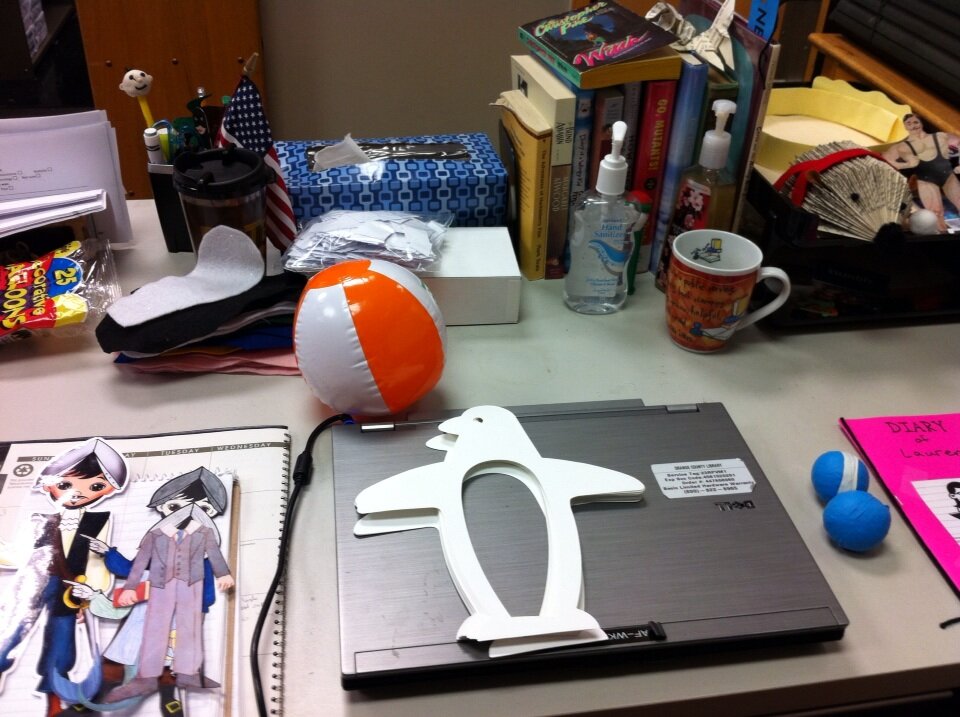 Top row – random papers, balloons, felt pieces (for penguin craft), cup, pens (including my awesome Wimpy Kid pencil-topper), flag (from the citizenship classes I teach) ball, box of pencils (for craft), tissues, lots of books*, nerdfighter bookmark, hand sanitizer (because some books returned are just gross), library mug, paper hedgehog, crown (for being an Employee of the Year finalist), files, paper strong man (because who DOESN’T have a paper strong man on their desk?)

As you can see, my desk primarily acts as a resting place for craft supplies and program preparation. It’s crowded and messy most of the time. It’s colorful and crazy. And man, I love it.

* – My favorite book there is Huck Finn. A girl donated it, and it’s all annotated with her notes. But these aren’t “this is symbolic because,” notes, oh no…they’re “OMG HE IS AWFUL” notes. And I feel like THAT’S how you should read a book. She’s relating to it, responding to it. And it’s awesome.

** – My library is celebrating Florida’s 500th birthday with many programs and crafts and promotional materials. One thing we have is Flat Ponce de Leon. We’ve already given him a tour of the library. My co-worker and I are now giving him new clothes, because WHY NOT?

My birthday was yesterday, so I’m officially 29. It’s weird because it’s not weird. I mean, I thought I’d feel older or wiser or different, knowing that 30 is so close, but really? I don’t feel different at all. I’m okay with 29. I like 29. What I do feel, though, is sick and that’s kind of annoying.

My cold, however, did not stop me from dressing as Katniss for work: 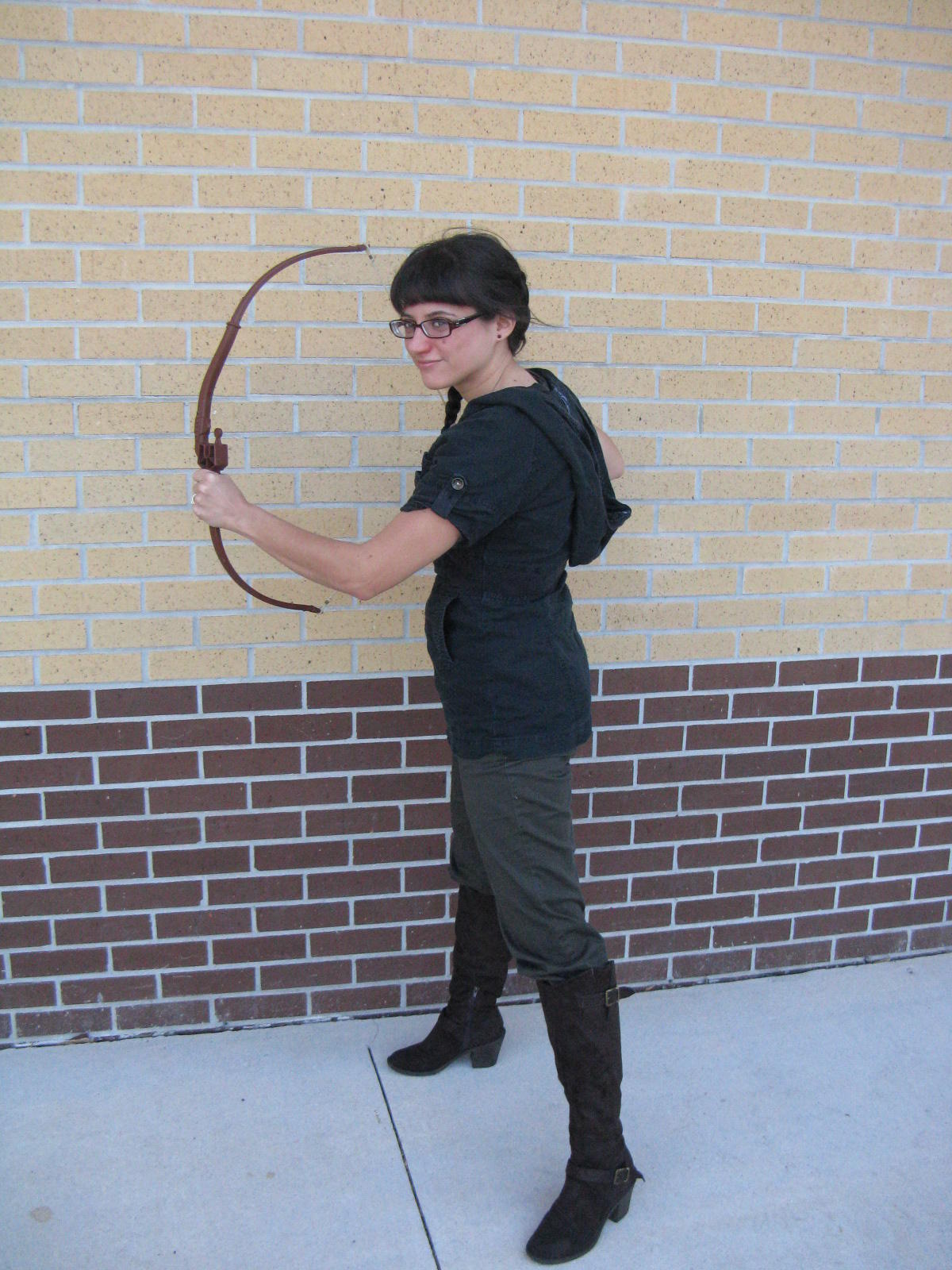 I’m a librarian. OF COURSE i’m going to be a YA character for Halloween. I felt super awesome all day.

I’m pretty sure the best part of the day was when a little girl looked at me, then grabbed her dad’s sleeve and loudly whispered “DAD, THAT’S KATNISS!” I almost cried.

Also, I decided last minute to actually do NaNoWriMo. Last year I was in it on my own – this year a few friends were convinced to try. I’ve had an idea floating around my head for quite some time, so I figured – hey, why not. So, I’m starting. I’m not as psyched as I was last time (and I think that’s mainly because I had never finished a novel before at that point), but I am committed to my story. I like my story. And I know that even if I don’t “win” NaNo, I’ll still complete it. And I feel good about that. (Friend me, won’t you?) Also, I apparently really like short sentences this morning.

So, I’m starting 29 with a new story, and the excitement of that outweighs the annoying cold. Because colds come and go, but stories stick with you forever.

(Please blame my cold for the ridiculously cheesy last line.)

Permit me to be sappy for a second.

The above video was taken last weekend. After planning it for quite a few months, my Nerdfighter Library Meetup* happened, and it couldn’t have gone better. Twenty-one awesome people showed up, 17 of which were teens (which is a very high teen count for our library. Very high.) Everyone was so nice, and so excited. We were all unified by one common interest, and it showed. And, really, by the end, I couldn’t have been happier.

That is, until one of the teens posted the above video and I kind of teared up. Because, you guys, this is my life.

At 28, I’ve had three different careers. Not jobs, careers. I was a high school English teacher. (I quite\ after a year because it was just so hard. I loved some of my students, and I would have continued for them, but there’s just so much pressure, and honestly, I was only 23 at the time. And I sucked at discipline.) I was a copyrighter/magazine editor. (Fine jobs, but I never wanted to write for myself when I was writing all day. I started hating writing because it was forced and assigned, not creative and fun.) And now I’m a librarian. (And, yeah, still a writer, too.) I was so scared to start library school because even though it sounded amazing…what if I didn’t like it? What if it was just another failed career move? I went into the degree knowing I wanted to work with teens again, and I left confident.

And now, a year and a month after I graduated, I have that job. I’m a public librarian working with teens. And for the first time in my career, I can honestly say I love my job. I know how rare it is to hear that. I know how lucky I am. And don’t think it’s all cotton candy and unicorns and happy soundtracks. There are bad days. There are bad patrons. But I get over them because I know there’s also so much more.

There’s a little boy who called me his favorite librarian after I recommended a book he ended up liking. There’s a little girl who visits me weekly, just to say hi. There’s a teen who asked for relationship advice, and other who asked for career/college advice. There are the moments I know I’ve made someone’s day better just by having the one thing they were looking for in stock. And there are teens who make videos of my events and post them to YouTube because they genuinely had a good time.

This is my job. I honestly couldn’t ask for me.