This past weekend, PAPER TOWNS hit theatres. That was the first John Green book I read. I loved it for many reasons: 1) it’s just so beautifully written 2) the story is universal and yet unique 3) it takes place in Orlando. It’s rare seeing your city shown in books, and even rarer in books you really enjoy, and even rarer rarer (sure, go with it) when you recognize the landmarks. It was so neat seeing characters going to Winter Park High School, living in Baldwin Park (though not mentioned by name), hanging out at the Suntrust Building. These are locations I pass all the time. I can feel those characters there.

I did something similar with THE NIGHT WE SAID YES. I used real Orlando locations (though changed the names), in hopes that those who live here can feel the book. So, here’s an inside look at some of the real locations behind the fictional story. 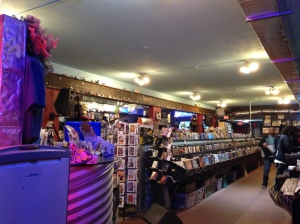 Shout out to Jenny Torres Sanchez, who went with me to Park Ave CDs to take this picture. And get records, of course.

And though not a location…

The Pepperpots are slightly based on fact! Matt, Jake, and Barker are made up, but the name is a shout out to my best guy friends’ high school band, The Pepperpots. I thought they were the best band in the world back then. Fun fact: The drummer filmed my book trailer. And the other two came to my release party. And above is a terrific photo of them from, I think, 1999.