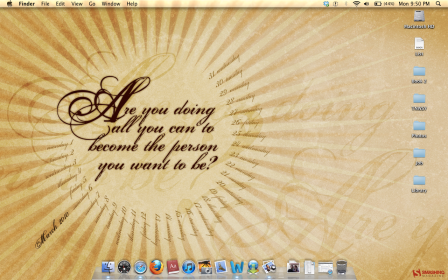 When I got my first personal computer in 2001 (a high school graduation gift), my favorite thing to do was change the background image. I really liked the idea that a simple picture could change the entire look of a screen.

That month, I found a background that just seemed…perfect. A simple tan background, it had the quote…

Are you doing all you can to become the person you want to be?

You all know the ending of that story. I didn’t become a major author that year, but I did finish a book a year and a half later and today I have an agent. It’s lovely, really.

So yesterday, looking at my desktop background, I considered changing it. Why would I need something to push me to write? I do it easily now. I became what I wanted to be.

But to me? That’s not enough. I want to keep going, keep pushing, keep being. I want to remind myself to keep trying no matter how tough it gets. Because I want to continue doing all that I can. Because it’s not always easy, but man is it rewarding.

What do you want to be? And what are you doing to get there?