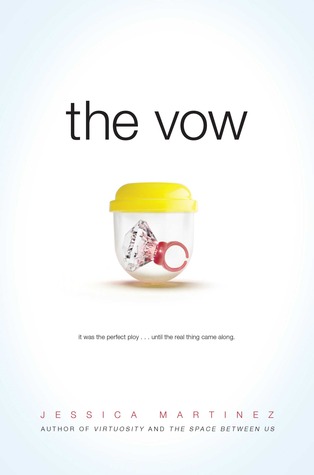 Every now and then a new YA book comes around that’s different from all the others. I get really excited when that happens. Last night, I finished The Vow by Jessica Martinez, and not only is this book completely new, it’s also beyond good and, I personally think, beyond necessary.

No one has ever believed that Mo and Annie are just friends. How can a guy and a girl really be best friends?

Then the summer before senior year, Mo’s father loses his job, and by extension his work visa. Instantly, life for Annie and Mo crumbles. Although Mo has lived in America for most of his life, he’ll be forced to move to Jordan. The prospect of leaving his home is devastating, and returning to a world where he no longer belongs terrifies him.

Desperate to save him, Annie proposes they tell a colossal lie—that they are in love. Mo agrees because marrying Annie is the only way he can stay. Annie just wants to keep her best friend, but what happens when it becomes a choice between saving Mo and her own chance at real love?

The story is told by both Mo and Annie, alternating voices every other chapter, and because of that, you can see both of their struggles, and both of their willingness to risk a lot for each other. This isn’t a relationship book (though there is that), this is a friendship book. It’s about doing everything for your best friend, because you need them just as much as they need you. Because you know they’d do the same. And though their decision to marry at just 17/18 and basically lie to the government is extreme, it’s also real. Because if you could save the person you love (even platonically), wouldn’t you? How much would you risk or change yourself for someone? That’s, essentially, what the book questions.

And there’s more, of course. There’s Annie’s past, and why she’s so determined to help Mo. There’s Mo’s past, and struggles with racism after moving to a very small, very white city. There’s the idea of belonging to a place and fitting in, and what it’s like when the place you used to call home isn’t any more.

Jessica creates a very believable story, with an amazing cast of characters. Annie and Mo jump off the page, and you find yourself cheering them on even when you know it’s a stupid decision. Because they’re so well-drawn and real. The supporting characters are just as good – the co-workers at the ice cream shop where Annie and Reed (her chance at real love) work. Annie’s parents. Mo’s parents and vulnerable but strong younger sister.

Though Jessica does a great job creating these characters, and showing the reasons behind every decision, what she does best is create an atmosphere. You feel the town around them. You understand Mo’s fears. You get a look at Jordan and know why he won’t fit in there anymore, even though he didn’t, originally, fit in America, either.

And, on a personal note, Jessica manages to gently address the racism issue so wonderfully. She could have gone extreme, she could have ignored it completely, but she walks this wonderful line that’s true. I say it’s personal because as someone with an Indian husband, I’ve seen the looks he’s received, I’ve heard the comments. I know he’s the only ethnic person in a room sometimes. She wrote what he’s gone through. (Though not the immigration issue; he’s a resident here, thankfully.)

I highly recommend The Vow if you’re looking for something new and powerful. It’ll take you by surprise. It’ll make you cringe and cheer and weep. And it’ll piece you all back together with its power and beauty.